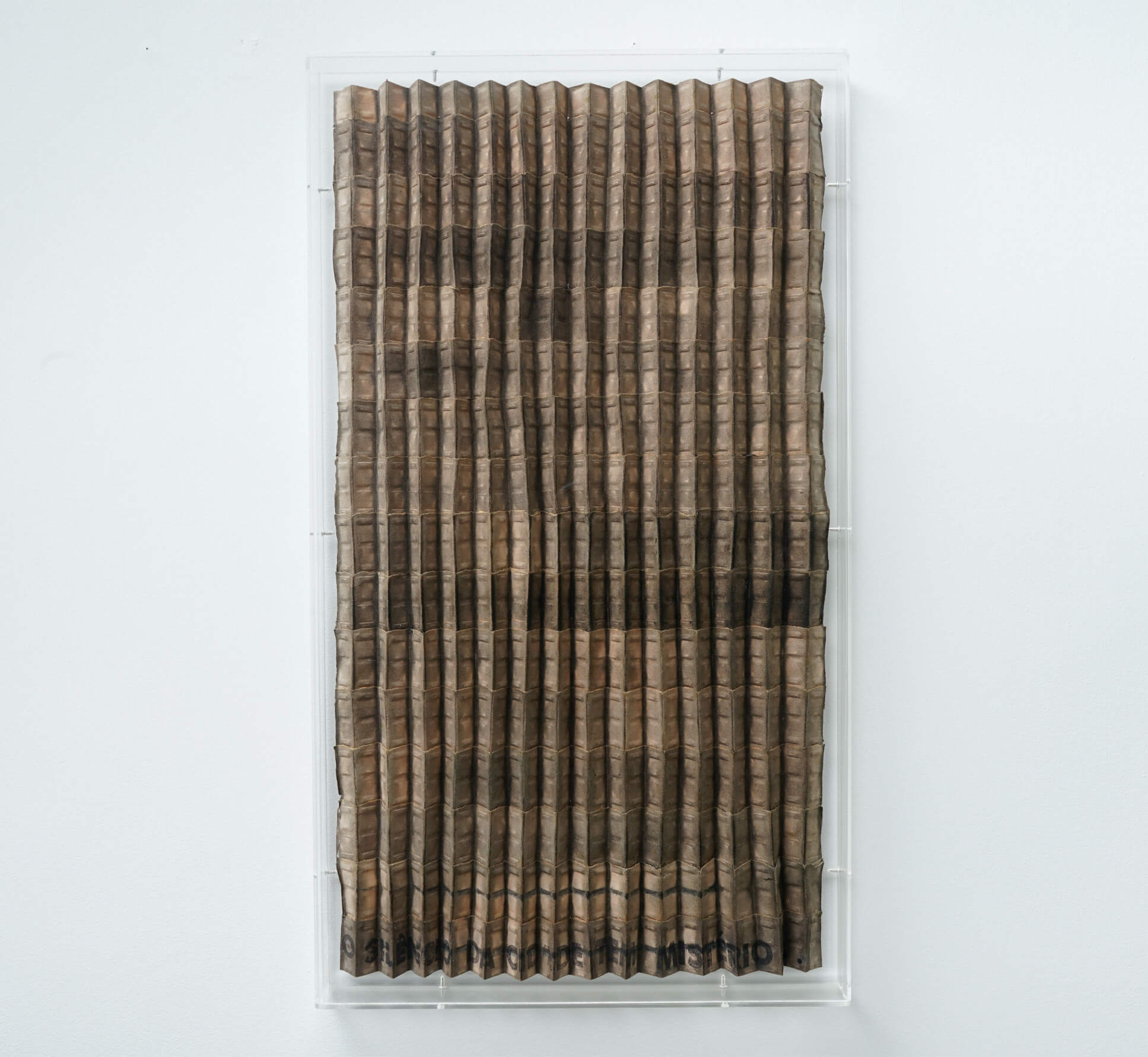 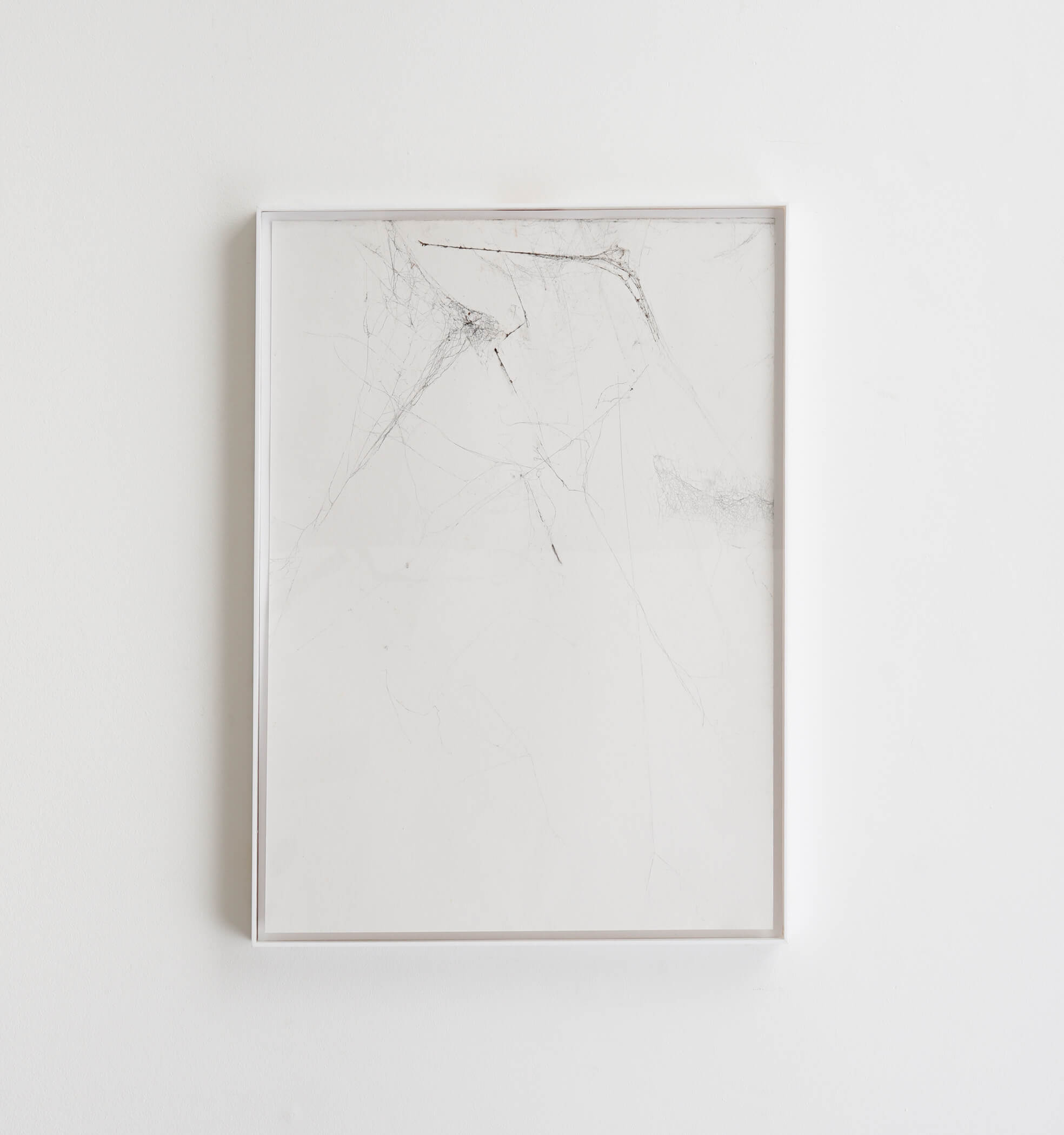 The artist is interested in literature, residues, leftovers, and the trail of fleeting and fluid things.

Shirley’s work has a dichotomous character between the memory of her childhood in a farm, in the kitchen with a wooden stove, in the dirt, in the clay and in the presence of branches; and the urban environment, in the smoke of cars in big cities.

Her drawings made with smoke mark her trajectory. As well as the drawings made with citric substances, in a technique that the artist named ‘pirofitografia’, which registers a series of small gestures that try to retain the volatile, the ephemeral.

Since the 1980s, her research has had metal, together with wood, be the elements for her three-dimensional production. In recent creations, the artist incorporates metals such as bronze and aluminum for sculptures that seem to melt and question our notions about gestures, matter and time. 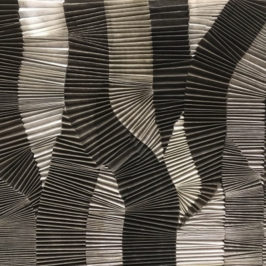 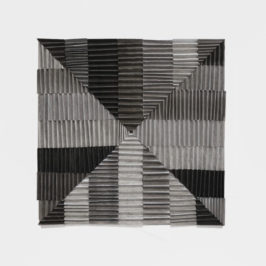 The darkness, the density, the accumulation of matter, the compressed space. It is not easy to breathe, it is not easy, it is not. The body struggles, and the lungs blacken. The white paper turns black from so much soot, pollution, smoke, dust, and sparks. By the chimneys of industrial poles, by automobile exhausts, by cigarettes burning on bar tables, by forest fires, and even by the wood stoves. O pó habita[1] (The dust dwells). In another moment, spider’s web blackened with soot (picumã). Forever, picumã. In the hospital’s waiting room, the only circulation of air is through the air conditioner. The closed window, the white light, the cold wind, the time that passes by extended and unwilling. At each blow, a little less life. The creaking of the air in and out is thunderous, even if it is silent to the ears. What is the sound of the air? Time passes by, while revealing colors and shapes previously invisible. Qual a cor do ar?  ( What is the color of the air?). The skin, the paper, the lung, and the landscape transform themselves, they gain marks, folds, and they darken. The empty space, the space full of air. Abertura pra o infinito  ( Opening to the infinite). Installed on the ceiling, the air conditioner’s geometric shapes provide visual escapes. The inside is the outside, the outside is the inside. How many triangles fit in a square? Amilcar de Castro’s flexible geometry keeps an affective memory. Cut and fold, familiar gestures which span through Art History. Concretism and houses with wood stoves share the same space/time, traverse thoughts, and materialize ideas. Sensitive geometry builds landscapes of a city without horizon, with constructions which give shapes to mountain ranges of concrete. Buildings are erected side by side, walls which elevate other walls. Horizon where? O céu não tem margem (The sky does not have a margin). Words are annotated in small pieces of paper, loose pages, and notebooks which get lost inside the purse. A black hole carried under the arm. Shirley Paes Leme is her own studio, her own land. She is the culture of her own. The land in me is not the same land in you. My land, your land. The land seems light, but it is dense. Walk, work, love, think, draw, talk, desire, cultivate, stop, and speak. Sometimes the words come out hoarse, when not melted. Suspiro em vão (Sigh in vain). Filters of automobile air-conditioners and surgical masks need to be changed from time to time. Works of art are cultivated in the waiting room of the hospital, inside of the car, in a little wattle and daub house or wherever the air reaches. Art makes visible that which we look at without realizing. Artists know that strangeness is part of an attentive perception. Insects born in bull feces germinate ideals: culture. The germ of life. If it is on the field, it turns into stone; if it is in the sea, it turns into water; if it is in the city, it turns into a building. Viver desconcerta (Living disconcert). The body is airy, but São Paulo’s air is suffocating. In the smoky city, the greyish hues of air provide a neon pink sunset. The antagonism between country life and life in a metropolis is pulsating. Once it was said that the countryside doesn’t need art, because there you have nature. Where is culture born? Knowledge derived from stories experienced in childhood goes hand in hand with the knowledge which is learned at university. O tempo antes do tempo (The time before the time). In the beginning, the paper weave was braided among the branches and vines of the trees. The polluted city air or the black smoke from the wood stove are traces of a time that can be seized by paper. The paper that draws instead of being drawn on, the painting that paints instead of being painted. The air in contact with the skin of the paper. Epidermis, cellulose, photosynthesis. Respiração (Breathing). The golden lung inhales the air of the city. Where leaves are made of money, the golden lion tamarin only exists as an image of twenty reais. Red macaw, jaguar, hawksbill sea turtle, and maned wolf are also some of the endangered animals.

The Amazon burns in flames, but it is only noticed when the sky of São Paulo darkens at 3 pm on Monday, August 19, 2019. The air is dense. Retake the air, sigh the mourning. A cloud of smoke originated from wildfires thousands of kilometers away. There is an abyss between the Southeast and the North of Brazil, between your land and my land. O ar uma mirage (The air a mirage). Atmospheric gases condense the pain that comes from within the Earth into the bodies. Gravity on animate and inanimate bodies is the same. Pain and hate cannot continue to rule us. Something is out of order, even though everything is apparently in the same place. What is the place of the order? The stuffed chest expands the ribs, while the emptied chest contracts them. The movement is the same, repeatedly, from the moment you are born to the instant you die. O instante é a respiração (The instant is breathing).