simple as a triangle_ sérvulo esmeraldo 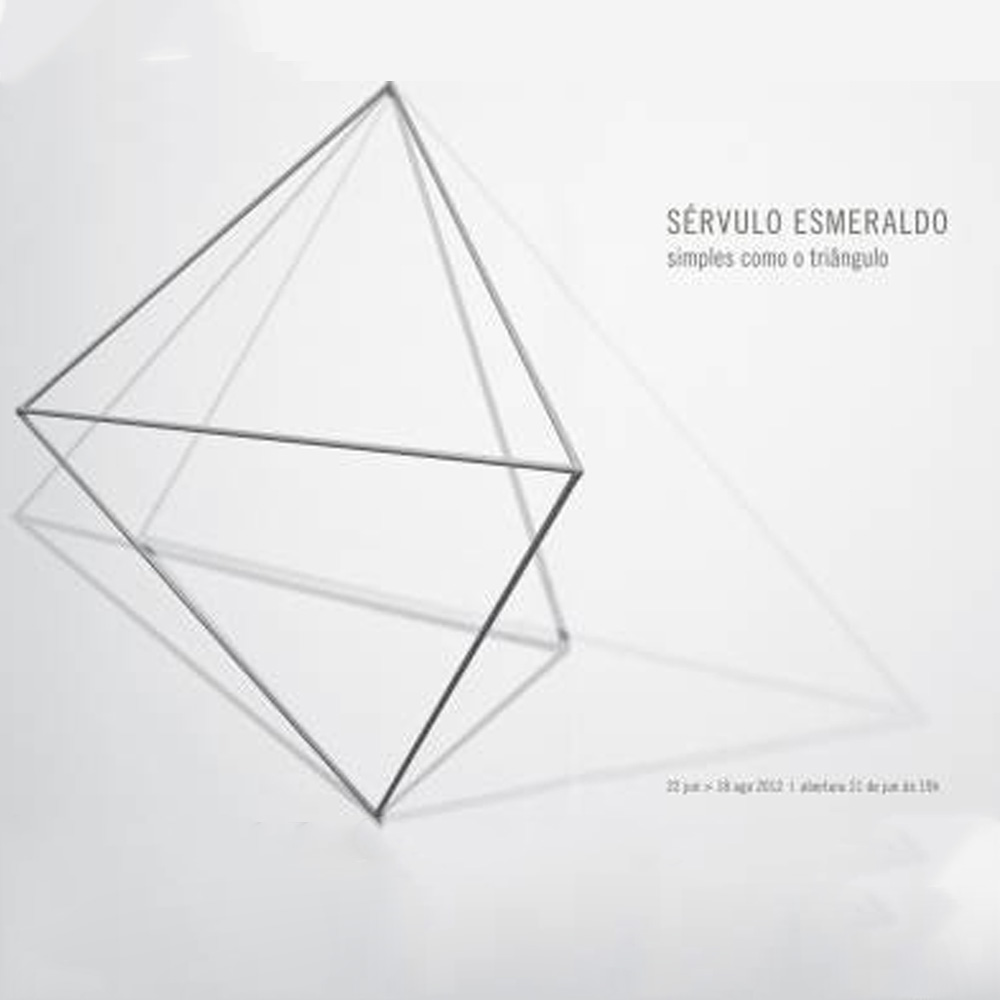 “In its apparent simplicity, the Triangle is, in fact, the “owner” of mathematics. The owner is little. The simplest of geometric figures, with their three vertices, dynamizes a defined plastic space like no other shape. , is deformable.

Triangular scissors reign over our heads that support lines, rafters, and slats. Well observed, the branches (forks) and the veins of the leaves are triangular structures. It would be too long and without interest to elongate the list of their merits. right triangle rotating and having as axis one of its legs describes in space a Cone, one of the most dynamic and elegant geometric figures.”

Sérvulo Esmeraldo, in a letter to his friend Zaza Sampaio

The importance of an exhibition in the trajectory of an artist is not only to reaffirm his presence and the continuity of his production within the circuit to which he belongs but, especially, to that of offering us the means to reassess the scope of his work, its complexity, and its ramifications.

In addition to his production in the field of engraving and sculpture, particularly that of a monumental scale, the work of Sérvulo Esmeraldo is also revealed in the creation of artist books, object books, and kinetic sculptures, and his role as a cultural agent. responsible for curatorial initiatives in the city of Fortaleza. This exhibition represents yet another opportunity to approach a pioneering work in several aspects and unique in its scope, of a rich and plural production.

In the mid-1980s, the artist Eduardo Kac published a chronological mapping of the major trends and experimental tributaries of the art of scientific and technological inspiration produced in Brazil. isolated form in the early 1960s. But to our surprise, Sérvulo Esmeraldo’s retrospective, held in São Paulo last year, presented a kinetic object entitled O Escriba, a 1962 device box where several needles are moved by the action of forces invisible magnets, giving this object unique performativity in Brazilian artistic production at the time.

While working as a professor at the Bauhaus, the Hungarian artist Moholy-Nagy published a study entitled “The five stages of evolution of sculpture from the point of view of the treatment of materials”2, in which he claimed that the evolution of sculpture could be synthesized as follows: from the static treatment of the mass to move. In its most advanced stage, the artist defined that kinetic sculpture would be responsible not only for the inclusion of real movement (and no longer represented) in the dimension of the work of art but also for the creation of “virtual volumes” derived from this kineticism. From there, the sculpture would be understood as “the midpoint between material volume and virtual volume, between tactile comprehension and visual comprehension of matter”. In this context, Sérvulo Esmeraldo’s Excitáveis, sculptures activated by the spectator that stimulate the internal elements of the work through static friction, mark the contribution of this artist to the international movement of kinetic art due to their uniqueness and invention, due to the absence of an electric motor as a source of movement. repetitive and

regular. In Excitáveis ​​“the body is the engine of the work”. Like The Scribe, they are artistic evidence that phenomena that occur in the physical world have their origin in a world of invisible dynamics. Or as the artist stated, “(…) I cannot help but think of the invisible forces that, through my intervention, were altered in one way or another.”3 Sérvulo adopts an “artistic attitude towards science” when he researches and works with the latent energy of imponderable fluids, with magnetism, or even when he plans to create a rainbow with water sprinkled in the central region of his city. His Theorems, linear sculptures without real relief, are geometric constructions that are not limited only to the contours of their material trace made in steel, but also expand through the environment in the form of their shadows. With them, the place where the work is installed is outlined by lines that act as dematerialized extensions of the piece in the environment. Virtual volumes.

1 Eduardo Kac. The Brazilian Art and Technology Experience: A Chronological List of Artistic Experiments with Technosciences in Brazil, 1986.