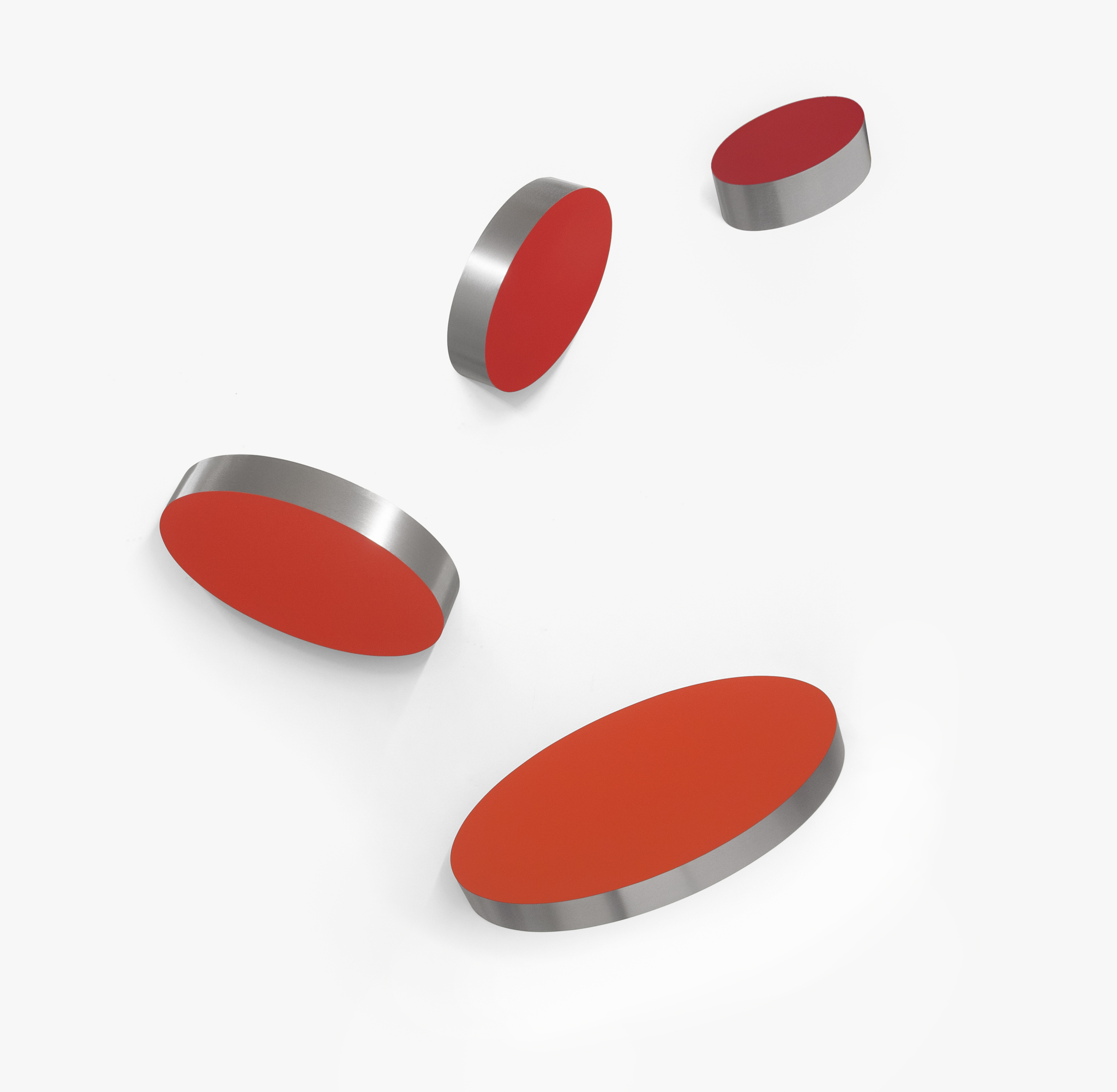 Even though every work of art only fully reveals itself when seen in loco, the essence of some survives well in photographs, while others are completely transformed in the presence of viewers. Wolfram Ullrich’s creations have both qualities. The geometry of constructive art and the tension between color and form are highlighted when they are seen in a catalog. In an exhibition, these characteristics do not fade away. There is still conceptual rigor behind each piece, but it does not say it all. Perhaps paradoxically, formal clarity implies the possibility of freeing the color from the surface and embracing the viewer; even if, to be free, color still needs material support.

Calculation and illusion are not opposites in Ullrich’s work. His reliefs depend on the wall at the same time that they seem to move away from it, through fluxes of color following the viewers’ movement. Acrylic monochromatic surfaces contrast with edges of polished steel, a material that gains lightness as if it were fluctuating in space, while we are invited to dive into absolute and overwhelming color. This is why one needs to enter the gallery and walk around it, move in different directions, letting perspectives intermingle, and discovering new vanishing points – just like the artist does when installing each exhibition, experimenting compositions, breaths, rhythms.

Seven years after his first solo show at Raquel Arnaud, Ullrich is back to the gallery with his monochromatic reliefs and a series of older works, indicating his path exploring painting beyond the canvas. Since the end of the 1980s, the artist has defied the bidimensionality of the painting, first through incisions or foldings that fragment planar surfaces. The show Rigor of Form, Freedom of Color also includes pieces in rusted steel from the 2000s, which foreshadowed the turn, in the following decade, towards creations radicalizing the tension with pictorial representation and the suggestion of displacement in space.

Traditionally marked by the right angle, Ullrich’s vocabulary has been expanding for the last six years to encompass elliptic forms in the works of his Orbits series, which are also seen in the exhibition. Composed by polyptychs, they are like moving circles, creating ellipses that seem to dance among themselves, in a fluctuating constellation. Even though they do not have the curves of the Orbits, the rectangular reliefs also carry the idea of flux and tension between parts folding in space. It is an idea materialized in interruptions of form, diagonals, and asymmetric displacements, giving the viewer the impression that the pieces of each work can suddenly fly apart, at the same time that a magnet seems to hold them together.

Forces of attraction and escape are stretched in Ullrich’s drawings, in which the artist plays with structures and discovers new forms in charcoal and nankeen, also exhibited in the gallery. More gestural and experimental, they trace trajectories in space, highlighting the rhythmic pulse that, in the case of the reliefs, depends on the relationship between artwork and viewer. Even though this characteristic is more clearly delineated in later drawings, one can see already in the older ones that the myriad of displacements was already there even before Ullrich had started to create his dynamic reliefs.

Among his most recent works, composed as a symphony on the first floor of the gallery, and the drawings and older pieces on the second floor, Rigor of Form, Freedom of Color is the result of conceptual thought and precise and intensive manual work. But that’s not all. The idea of a form, calculated and projected, will never be the same as materiality in space, and the model for any of Ullrich’s shows will never equate with the group of works that are presented, which always depends on the artist’s work in the exhibition rooms. Constructive art or geometry are not enough to describe Ullrich’s art, which is only static in a photograph. One has to leave images and descriptions behind and stroll around forms and colors, experiencing each one at his or her own speed, in the freedom that only rigor can provide.