ricardo ribenboim _ of everything, a little remains 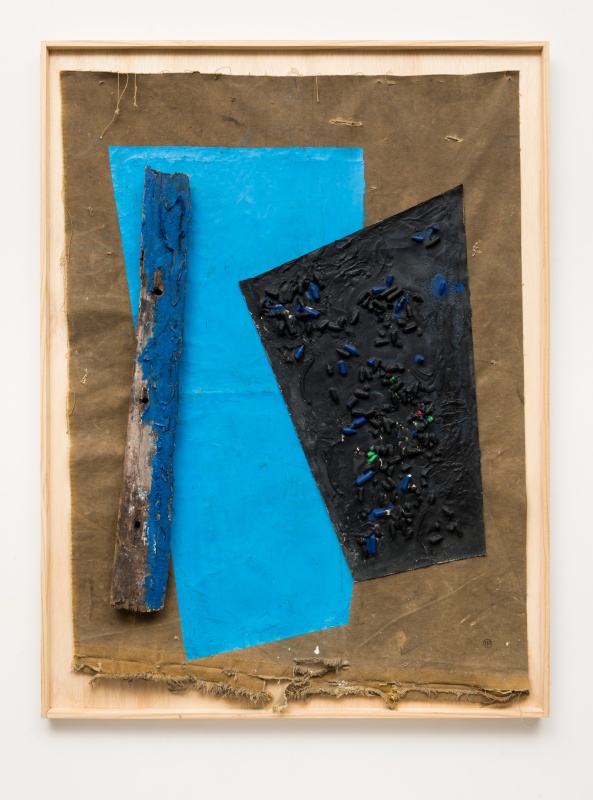 Pois, de tudo fica um pouco [For of everything, a little remains]

The reference to the line from the poem “Resíduo” [Residue] by Carlos Drummond de Andrade, in the exhibition’s title suggests the rise of images from the gathering and overlaying of scraps of wood, wax, felt, pigments, canvas, among other materials. In nearly all the pieces, the aesthetic plane is crossed by a ready-made element that restructures the work’s symbolic basis as an autonomous system, presenting a real gravity, a dynamics of specific dryness, direct colors and textures. The common thread in the show is constant research into the weight and state of materials.

About these works, Jacopo Crivelli Visconti has noted that “they are programmatically hybrid, suspended between two and three dimensions.” What drives the artist in this research, says the curator, “is not the desire to achieve a specific formal or aesthetic result, but rather the need to requestion everything he has done over the decades of his career. By transforming a nearly philosophical reflection into a physical and practical activity, Ribenboim brings the past to life and confers new meanings to the artworks and all of his experience.” This can also be seen in the presence of pieces of molds made directly on the artist’s head, fragments from another artwork. It is the trace of leftovers. What we read from the layers is therefore processed by these elements of a renewed and unquestionable objectivity: the ears appreciate the soft silence provided by the felt, by the depth of the beeswax, the face is coupled and highlighted by its semitransparency and by the dubious color of the surrounding painted areas, aloof from the vertical reference given by a neoplastic straight line, disfiguring the whole. These are pieces able to quell the paroxysms, the unjustifiable anxiety of the entire process.

An essential part of the artist’s path involves questionings into the relationships between nature and culture, in a research with resources drawn from borders between design and the incorporation of the eminently organic, including nuclei where this takes place with the substance of the supports developed in the artworks’ production. At these moments, there is also the notable presence of expedients with indexical signs that are presented as “points of return,” in the interior of the work itself, whose parity with the real, and the temporality which can arise out of it, is apt for a tensioning of the poetics with historical aspects, in a more lyrical or even tragic key. In this sense, Ribenboim considers “the first gesture the most visceral act of the artistic thought and, what follows this, mere production. By working on what is accumulated, left over, and remaining, I rethink these products and revive each them as a new first gesture, placing onto the stage each fragment of the memory that formalizes a visuality.”

Lastly, the piece Devoradores de Sueños (8th Bienal de La Paz, Bolivia) is reminiscent of the striking text from Brazilian literature, “Poema à Pátria,” by Jorge de Lima, which is articulated with the text narrated by the artist himself. The “lyrical self” wishes to announce, once again, the individual path associated to tragic aspects involving our culture – for example, the connection of Brazilian museological devices to fires that transform collections into ashes. The residue thus arises as an element of expertise and can push our perception onto a new level, the delirious, that of the vulture in relation to that for which we have lost our notion of distance, whether it arose from a woodcut by Goeldi or from the cultural industry. Here the most romantic view is set aside by the presence of an “irremediably twin, irremediably common” character.