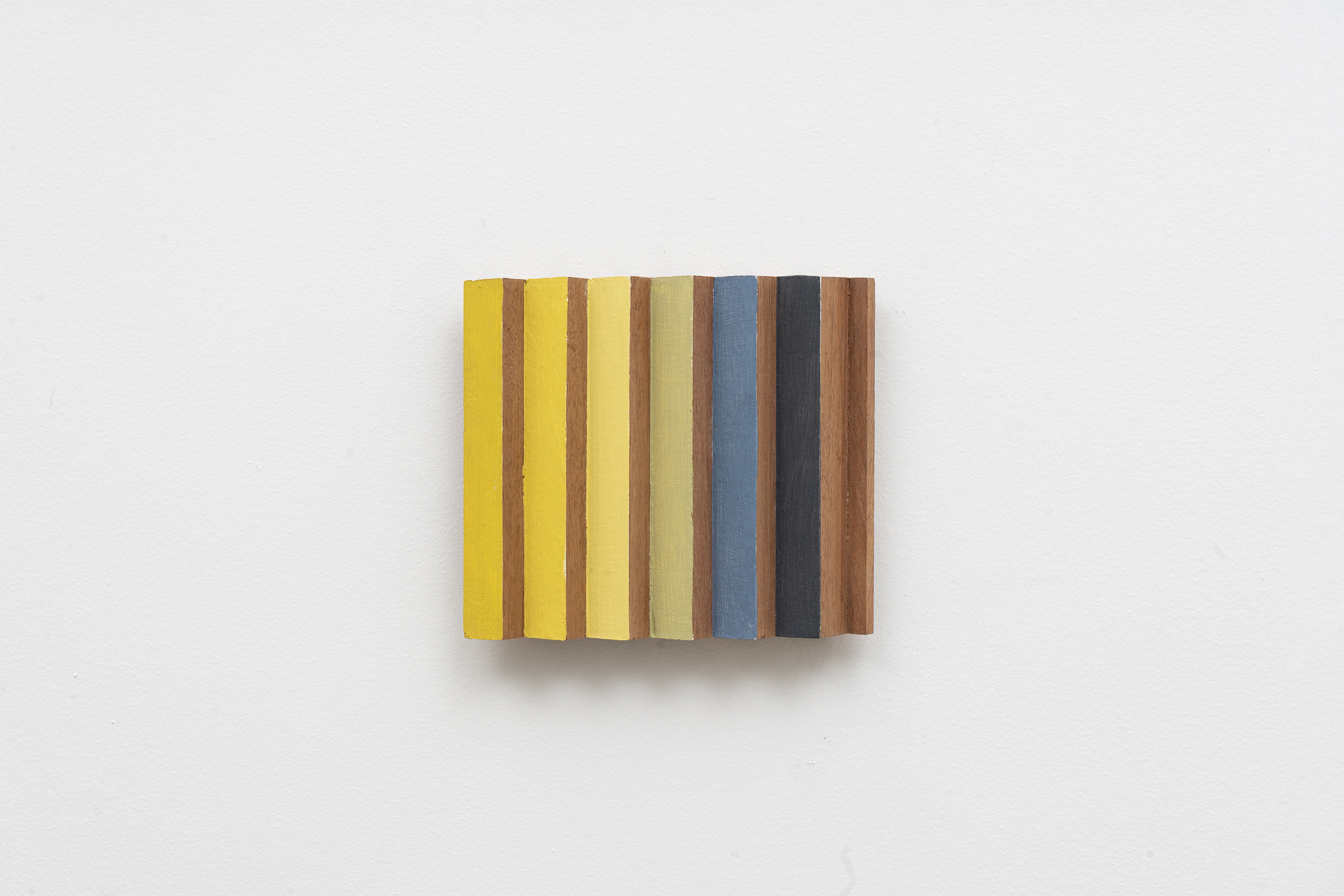 João walks along the railroad beside his house, among the deteriorated wooden sleepers next to the tracks and the abandoned pieces, worn-out, rusting, existing…

The passage of time amalgamates into the material and poetic structures, clinging to them and lightening the senses in a voracious search that is not merely aesthetic.

Without limiting itself to visual and textual notes, which are very well woven in the drawings and concepts, his notebook exposes us to the knowledge of the dense strength of the wood and iron that he gathers in curious walks in order to welcome the “tension between two points”: balance x imbalance; folding x unfolding, in infinite dispositions between the visible and the invisible being. His body also dialogues with these wooden structures that the iron “hinges” articulate, and that are permeable to the imagination and penetrable to the body memory.

The structural articulations, traced with the same care as the graphism in his drawings, show us that weight, density and lightness dialogues with space and matter, proposing that we live with changing forms and with the challenging, attentive vision of someone who is not only able to see, but also to belong and to dream…

João holds intuition and erudition in equal weight, connecting matter to poetry with accuracy and precision. He pays attention to the body of this matter that suffers with time and runs on the iron surface which receives the weight and tension of the train that passes by his mother’s house twice a day. Not only does it carry the load brought to its destiny, but also something that every eternal boy sees from within his imagination and which is not possible to be said just through passion and words.

I remember that Milton Nascimento, as a young boy, drew a train on the rail under the sun of the Geraes, like a good mineiro. He then used it as a symbol for his records.

João, with a similar passion for trains, professes an original alphabet of the memory of destinations, hitches, wears and tears in order to format, with almost scientific precision, its consequent unfoldings in the various media and belongings of languages ​​that always have their own body as grammar and poetics.

I walked with him in a late afternoon, along these neighboring tracks, and I could witness his enchantment with these matters, without which art and life cannot be one.

Wood and iron, solitude and courage, matter and impermanence shape a singular work that wants and reflects on mutability as if it was a train that articulates itself with pliability and musicality, full of sounds and rhythms from the wagons, balancing elegantly, voraciously and fleetingly on rails. Trails that never seem to have an end, such as the aesthetic solutions that Trevisan unfolds and allocates in a provocative dialogue with the exhibition spaces.

All this perception of what is and isn’t outside the edges of the rails, that otherwise seems to live inside the sleepers’ wood, and leaps into his painting, which could have a minimalist content; but it is just a poem about what is essential.

He paints what it seems to be the intimacy of whatever sleeps and dreams in the substance above which the trains passes vacant and leaves behind, in the sleepers, a dense piece of information about their journeys, loaded with materials and heavy weights that compose a concrete and absurd song.

The delicacy and essentiality in João’s paintings give him kinship and association, in the history of art, with the works of sublime and essential chromaticism in Morandi; in Brazil, with the singular Alfredo Volpi, the fundamental Willys de Castro, Hércules Barsotti, Lothar Charoux, Eduardo Sued and, more recently, the refined Paulo Pasta. These artists are connected to him, inspiring a constructive legacy and a visceral heritage of art and concrete poetry, ingeniously activated by the brothers Campos and Décio; but such poetry and art have shaped our vocation for constructive poiesis also due to our Afro-indigenous heritage, and not only because of Max Bill’s passage through the Bienal de São Paulo in 1951.

There is a somewhat constructive reason, that also suffused with the intuitive aspect that permeates Trevisan’s work, which enchants us in his arduous craftsmanship. There is a métier of transcendent poetic flavor when one delves into the soul of the painted matter and reveals mysteries that have never been dreamed of before, like young contemporary artists in Brazil do with such boldness and daring.

The subtle sheets of transparencies, which cross and cut the eye to hide in the night of silent musical intervals, also seek in the staves/paintings the precise and precious poetry of João Cabral, who is inspiration and title of the paintings that border a state of metaphysics. In Cabral, they are cutting blades for planting sugarcane fields, which is a hard activity for the worker. In João, the painter, it is a gift of music that João, the poet, has never loved. He just wanted – a lot – to learn from the precise hardness that laminates and gives preciousness to stones.

In Trevisan’s precious/precise paintings, there are also early and affective memories that dazzle us through chromatic subtleties, also put to the rigor of construction by means of the challenging technology of encaustic.

Among these paintings that desire the sublime – placed in the abyss of many of the young artist’s uncertainties, but firm in artisanal and conceptual maturity –, there is a João who builds with a patience worthy of the masters, the admirable constancy of the sages and the extraordinary faith of the artists who believe that the desire to make Art without fear is seminal.

João is already a wise man in a poetic art that watches over and reveals – between the infinite and the finite, in constant balance and tension – that the painted and sculpted pour out the wisdom that turns Art into a bridge to an eternity: now! 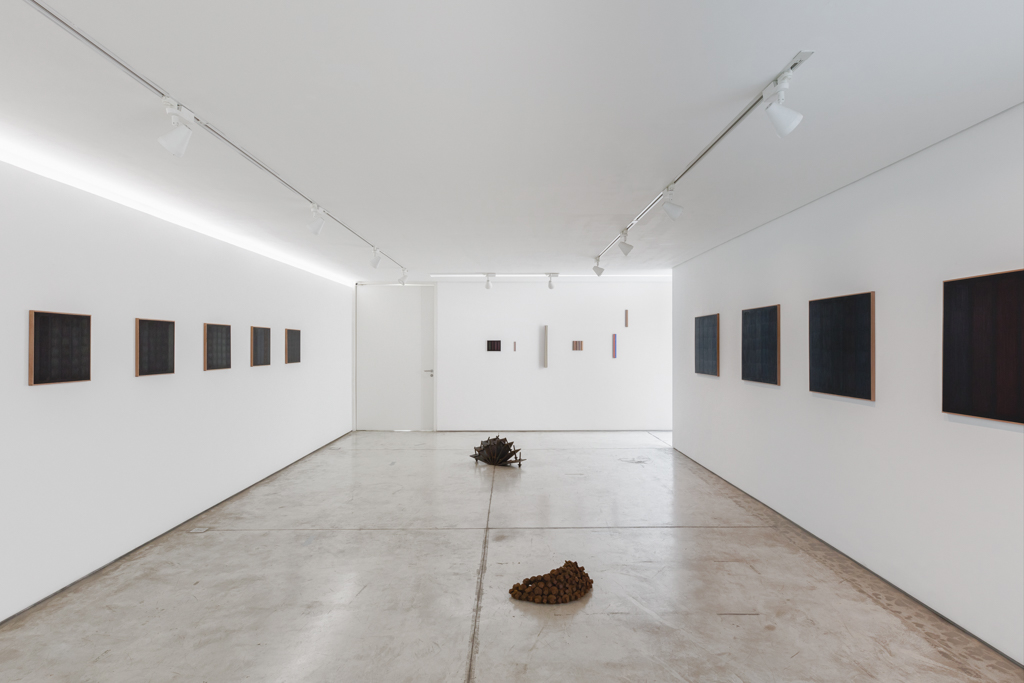 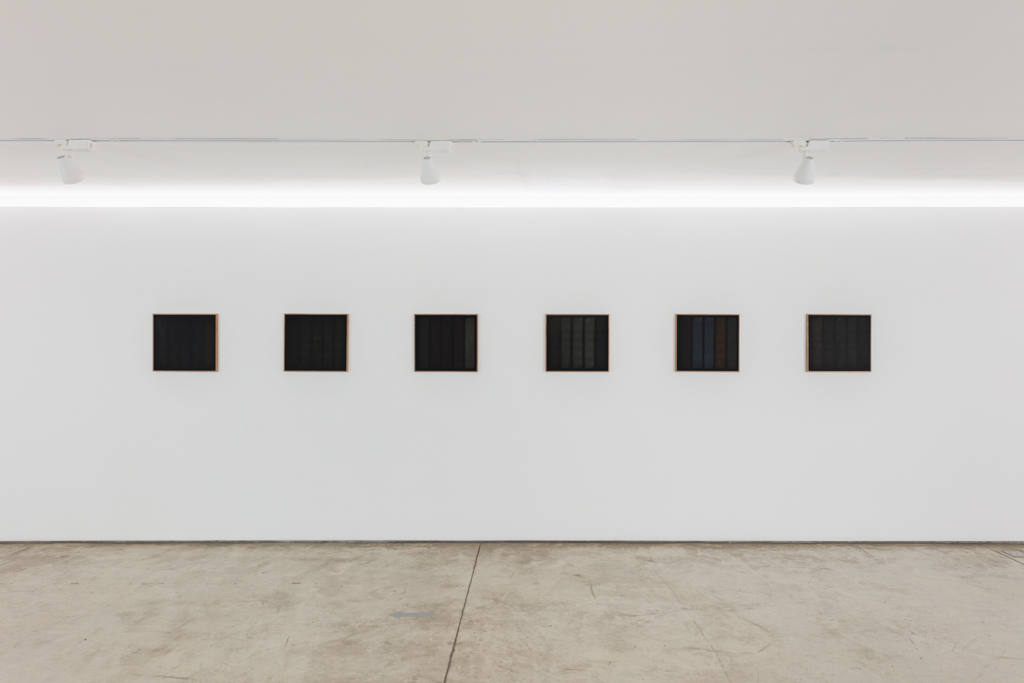 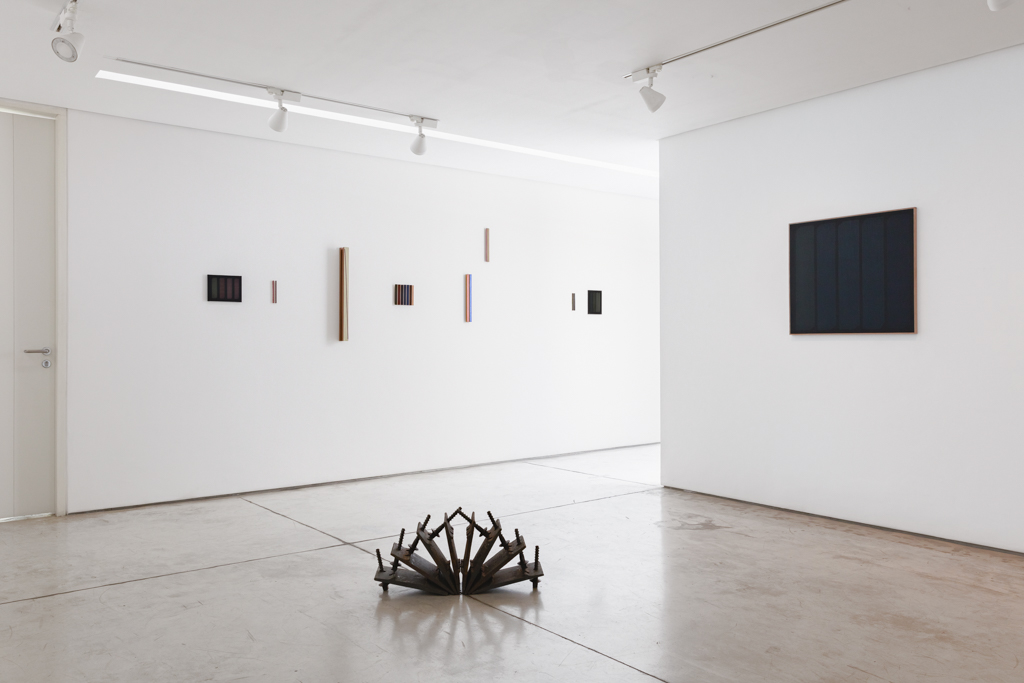 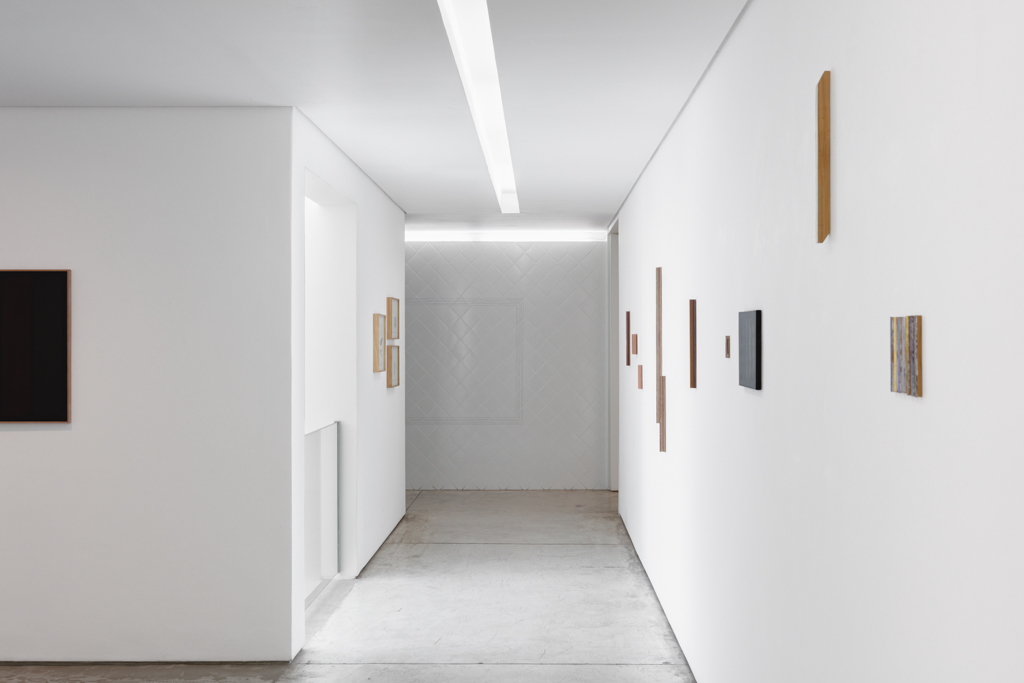 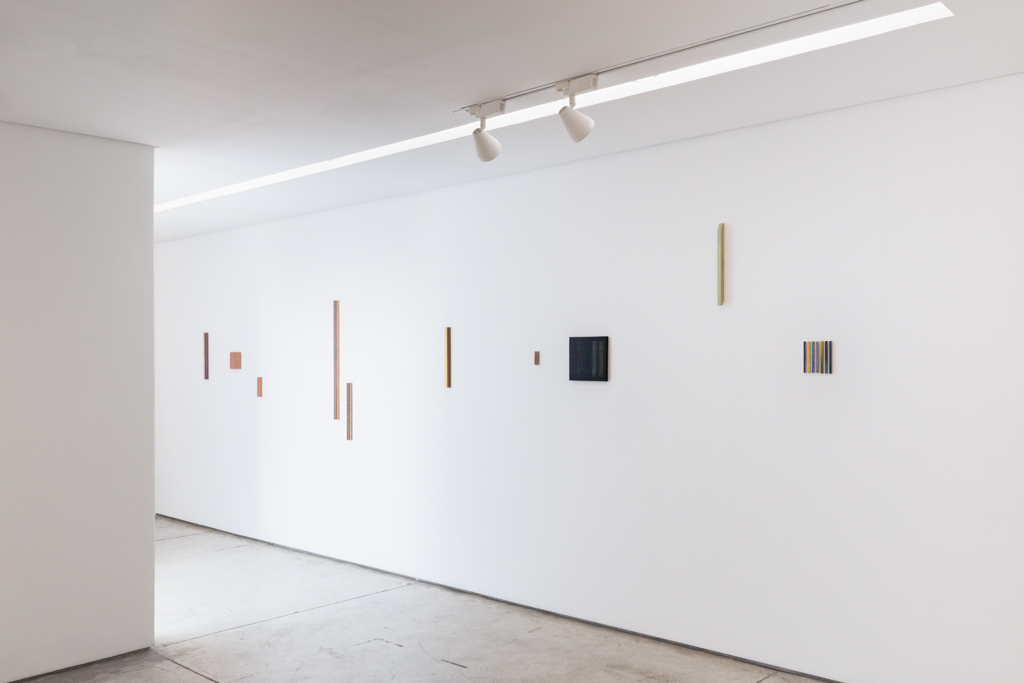 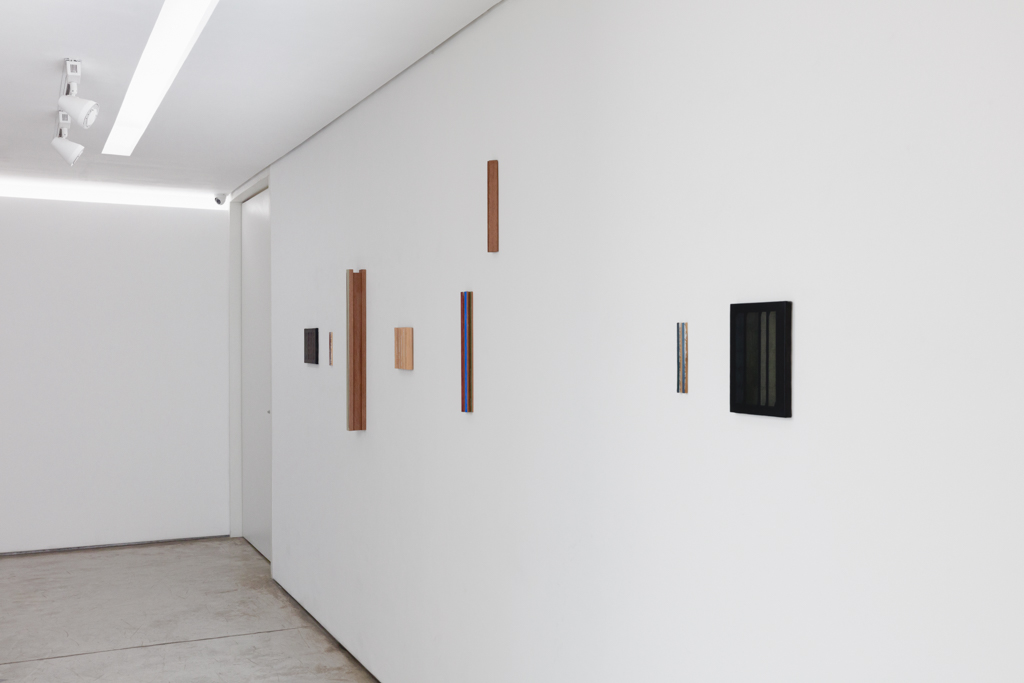