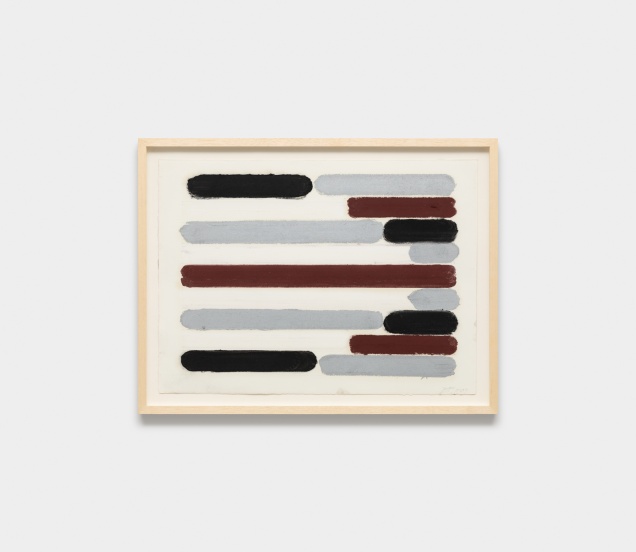 Galeria Raquel Arnaud is capping off its activities in 2018 with an exhibition of paintings by Daniel Feingold,in celebration of the 25 years it has been representing the artist. In various supports, scales and materials, the Rio de Janeiro painter presents a set of artworks that establishes constructivist narratives between the space and its unfoldings, chromatic planes and their foldings, revealing a pictorial game fundamental for understanding the artist’s poetics.

On the ground floor, Feingold is showing a selection of around seven works from his Estrutura[Structure] series. They are large-format paintings made in synthetic enamel paint on terbrim canvas. Synthetic enamel, a thick-bodied, quick-drying paint with straightforward application has been used by the artist since the beginning of the 1990s, when he was awarded a study grant from the Brazilian government to obtain his master’s degree at Pratt Institute, in New York. Curiously, it was at an exhibition at Galeria Raquel Arnaud, in 1998, that Feingold first presented artworks with this material.

The use of synthetic enamel was opposed to the diaphanous painting the artist had been producing up to then. The aim for the aesthetics of purity, according to the artist, gave way to the search for a pictorial unity based on what critic Luiz Camillo Osório called “controlled randomness.” Daniel Feingold does not use a brush. His method consists in pouring the synthetic enamel paint from the top of the canvases through the use of a can with a spout at its top. It is this gesture of his hand that determines the amount of paint poured, seeking to conduct an uncertain process and result. The painting takes place in this original process, where the geometry simultaneously organizes and confuses the gaze, creating an optical game in which the observer cannot distinguish figure, background or even the limits of the lines created by the pouring.

According to Paulo Sergio Duarte, who authored the text for the exhibition, “There is a long patience and waiting. There is a time contained in each line of color that is poured on the surface. When we see it, it looks frozen, but it isn’t; this falling of each line, toward the edge of the painting, conveys a slow feeling that penetrates us and teaches us not to cling to the restless appeals of daily life.”

On the gallery’s upper floor there are smaller-scale artworks, most produced in 2018. There are about twelve artworks from the Pinturinhas[Little Paintings] series, made with oil stick on canvas, and more than 12 drawings in oil stick on paper. According to the artist, these artworks are a sort of subjective reaction to the always objective behavior of industrial enamel. They arise out of the need to create more affective aesthetic situations with a classic material, oil paint, which is completely opposed to the industrial character of synthetic enamel. While the interesting aspect of the Pinturinhasis their pictorial and chromatic freedom, agitation, and allowance of error in the gesture made with the oil stick, what we see in the drawings is a continuous exploration into the forms. They are artworks with a more restrained, concrete organization, which reveal how the artist’s training as an architect allows him to think about art in a way that is linked to architecture and design.

Daniel Feingold (Rio de Janeiro, 1954), lives and works in Rio de Janeiro. He earned his degree in architecture and urbanism from Faculdades Integradas Silva e Souza, in 1983. He has taken various courses, including History of Art with critic Ronaldo Brito, at Universidade Federal do Rio de Janeiro (1988–1992), Theory of Art and Painting at the Escola de Artes Visuais do Parque Lage, in Rio de Janeiro (1989–1990), and the “Deepening Center,” a one-year program in the painting studio of that same school (1991). In 1993 he was awarded a study grant from the federal government to earn his master’s degree at Pratt Institute, in New York. Since 1991 he has held various solo shows, such as Projeto Macunaíma, at Instituto Brasileiro de Arte Contemporânea (Ibac) of Rio de Janeiro (1992), Espaço Empenado, at Paço Imperial (Rio de Janeiro, 2002), Pintura, at Centro Universitário Maria Antonia (São Paulo, 2003), and at Galeria Raquel Arnaud, in 1996, 1999, 2002 and 2006. In 2011, he held a solo show at Atelier Sidnei Tendler, in Brussels, Belgium. He has also participated in group shows, such asAprofundamento, at Escola de Artes Visuais do Parque Lage (Rio de Janeiro, 1991); the 15th Salão Carioca and the 17th Salão Nacional de Artes Plásticas (Rio de Janeiro, 1991), winning First Prize at both; Crossing Lines – Art in General, in New York; O Beijo, and Paço Imperial (Rio de Janeiro, 1998); Gestural Drawings, at Neuhoff Gallery (New York, 2000); and the 5th Bienal do Mercosul (Porto Alegre, 2005). In 2007 he took part in the group show of Minus Space (a New York based website & gallery, he has been a member of since 2003), in Sydney, Australia. In 2010 he participated in the group show at Centro de Arte Maria Teresa Vieira, Rio de Janeiro. Galeria Raquel Arnaud has represented Feingold since 1993.