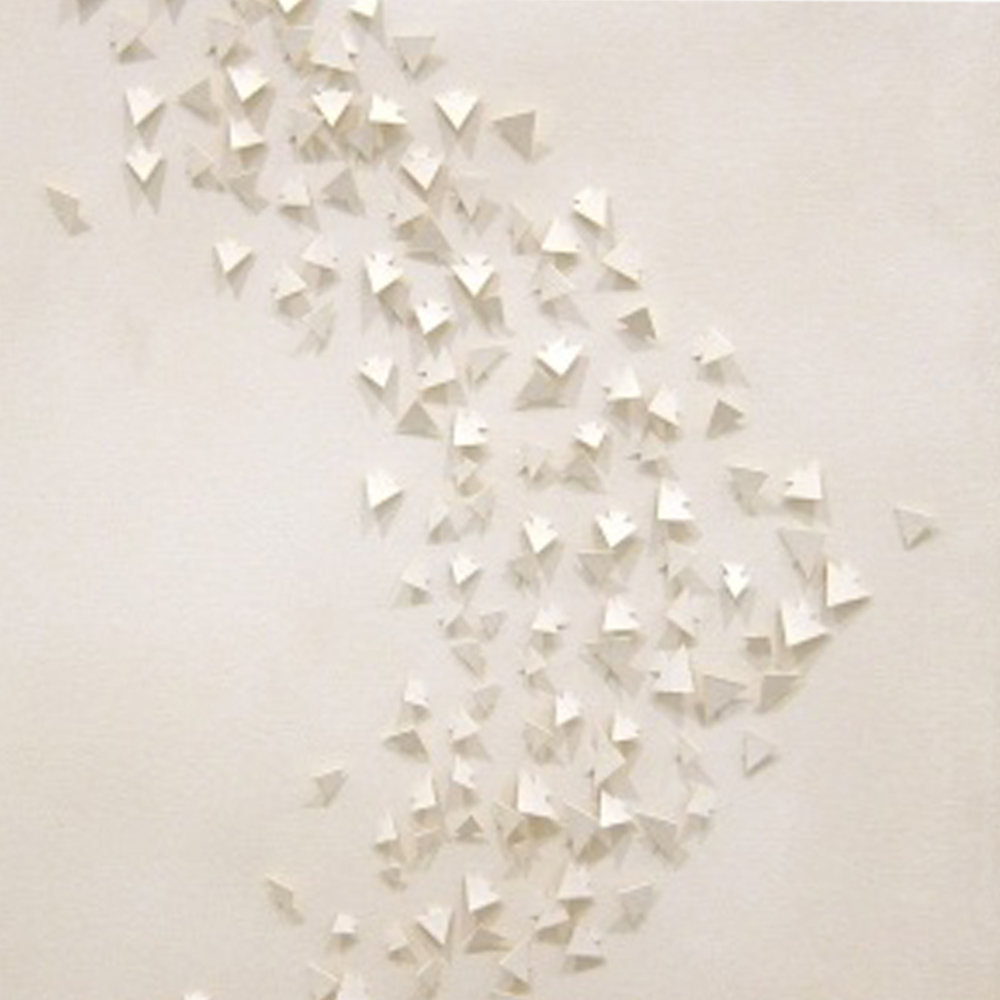 Once again Piza poses surface problems: how the three-dimensional erupts from the two-dimensional and the first manifestation of relief appears. Surprisingly, there is  always clear opposition between figure and background now gives way to the construction of a floating space. Those elements that previously stood out in strong contrast, affirming planarity, now as they disarticulate themselves into separate and distant units on the same plane or in superimposed planes, immersed in a fluid and dissolving three-dimensionality in which the figures are suspended, volatile, loose. Airy, penetrable, enveloping, the space created by Piza is full of suggestions and suggestive; evokes both the geometric shapes of Malevitch and the wires of Iole de Freitas.

The figures appear as if they were loose, free, and therefore as if they were mobile. We then have an unprecedented depth relief. Undoubtedly, this new series of works is directly related to the one carried out on sisal. The bristling and chaotic weave of the sisal was contrasted by the absolute limpidity of the metal plates. Now the geometric weave of the wire is nothing more than frayed sisal; the open surface in regular spaces: the spatial grid fully affirmed. The development of relief, Piza has always been problematized with the pictorial, with the opposition figure ground; opposition that now finds an imaginative synthesis. The grid is continuous, infinite, it can be cut and cut, it is always the same space – as the same is the superposition of the grids. So it is irrelevant whether the dimension is larger or smaller, the same question persists in both the first and the last. So Piza can go from one to the other.

What is surprising about the current works now is the radical reduction of scale that Piza performs. When the size of the works diminishes, a daring act that was successfully attempted only by a select few sculptors, such as Calder and Giacometti, Piza paradoxically finds another monumental expression, Lilliputian monuments, monumental miniatures because they are true sculptural atoms; particles with the highest possible density. These small concentrations, both explosive moments and, perhaps, fragments of a large explosion; archaeological remains of the work, found in the studio and carefully collected and individualized in each box as organized for a display of possible tests – the box is also a container that contains the sculptural energy. There we have a kind of archeology of the work itself, in each box a different example, a new “discovery”, a “rediscovery” of possibilities – the very superposition of the wires in the larger works is an indication of “archaeological” layers; of a sequence of spaces revealing different times. This radical reduction in scale also produced small constructive totems, vertical pieces made with minimal, synthetic operations, but of an unusual concentration – only in this way can the small scale be sustained. This unprecedented creative disorder, typical of the laboratory that is the studio, seems to have caused the disarticulation of the organic order present in some important moments of Piza’s work. Here, the diamonds, triangles, metallic rectangles, sharp and cutting shapes, oppose the previous cellular aggregation/disaggregation: the living surface becomes a living space that manifests itself in the tension that emerges from disparate geometric surfaces and from the dissolution of the superposition of wires.

Never, perhaps, has monochromatic color been so decisively present in the work as it is now. Irregular geometric shapes – shapes that are cutouts of color -, which so much refer to Malevitch, absolutely planar and monochromatic, are areas of absolute affirmation when facing the chaos of wires, but they soon dissolve, losing their sharpness the more they go deeper and move away from the surface, plunging into a space of dissolution of optical clarity. The superposition of the wires forms an obscure space in suspension, floating, in the shade, where the shapes and colors are not clearly presented; the absence of a background seems to throw the figures into an uncertain area, into an undefined and mysterious space, where the abstract rationality of geometry is suspended and the uncertain background on which forms appear and disappear is revealed; a poetics.