A revolution has to be made little by little | part 2: the quadrature of the circle 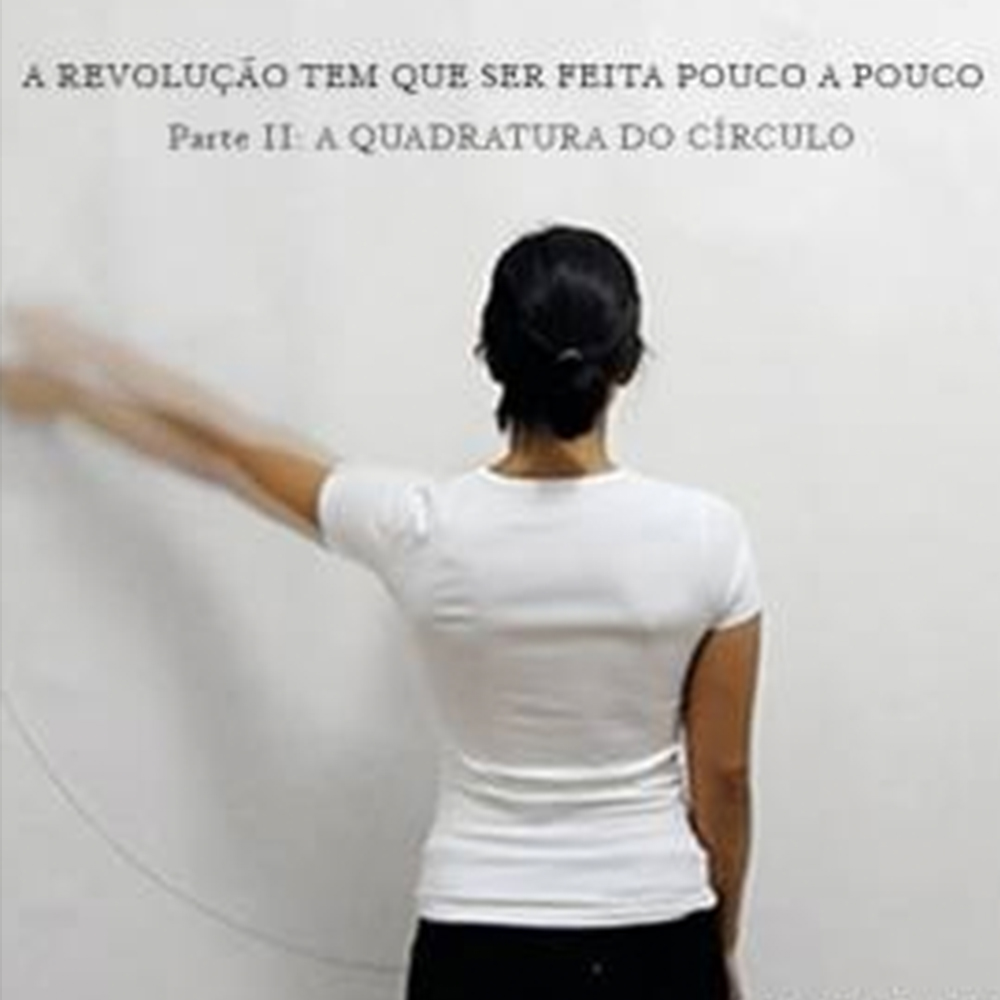 (an exhibition in four stages)

In his Practical Guide to deviation, Guy Debord argued that one of the most effective strategies of social insubordination would be the appropriation, or deviation, of other people’s phrases and concepts, for revolutionary purposes. Debord identified several types of deviations, among them the minor deviation, in which the appropriate words or phrases do not have their own importance, but acquire it by virtue of the new context in which they are used, and mainly the misleading deviation, in which the appropriate concept is intrinsically significant, but it takes on a different dimension and value in its new context. The phrase that gives the exhibition its name obviously belongs to this second typology: taken from a recent interview with Paulo Mendes da Rocha, in its original context it referred to the need for a revolution in the methodologies of civil construction and, metonymically, in the city and in society as a whole. In the new context, the phrase retains its fascination, but acquires other meanings, suggesting, first of all, the need for an art gallery to constantly transform itself, following the incessant changes of artistic production and (here too, one can -I was going to speak of metonymy or even premonition) of society. Evidently, the greater and more prestigious the gallery’s history, the more pressing and arduous this task becomes…

The revolution, says the architect, has to be done little by little. The works gathered here, at first organized into smaller and conceptually more cohesive sets, and finally rearranged based on other criteria in the final rerun, in fact, suggest a prolonged revolution, one of those that do not enter the history books, perhaps not even the books of art. art history, for the simple reason that they don’t begin and end, they just happen. And in fact, the choice of themes for the first three stages of the exhibition responds exactly to the desire to look, from different but complementary points of view, at the same universe. It is not by chance, moreover, that most of the works could perfectly fit into more than one of these curatorial frameworks: the revolution is magmatic, and fluid, like a river that is never the same, and that, however, never changes. The decision to divide the exhibition into stages, however, responds to the desire to break away from conventions, such as the one that dictates, for a gallery, the need to exhibit only ‘its’ artists, or not to repeat the same work in two exhibitions. in a row, or even not trying to build a narrative that dares to expand beyond the few weeks that a conventional show lasts. Finally, get rid of the prejudices that could prevent revolution, the first of which, of course, is the convention that a revolution has to be quick, surprising, and violent, when in fact it has to happen little by little, take as long as it takes. if necessary, occupy and change the world while no one is looking.

The Greek geometers were the first to face the impossibility of “squaring” the circle, that is, of constructing a square with the same area as ​​a given circle, using only a ruler and a compass. At first, the terms of the problem might seem simple: you take the area of ​​the circle, calculate the length of the side of the square, and you get the same area. But the account doesn’t add up, as if the measurements of the circle, used to living with its infinite curve, wouldn’t accept the transformation into something as rigid and inflexible as a square. Looking at it from afar, without a ruler or compass, what fascinates this problem is the metaphorical reading it suggests, the idea of ​​an unfinished dialogue, fatally approximate, doomed to an eternal opening, between the right angle and the circle that it faces. oppose. The history of art, which has so often approached that of geometry, has been fueled for several centuries by analogous clashes, apparently paradoxical, yet extremely fertile. According to Charles Baudelaire’s famous definition (in The Painter of Modern Life), for example, “modernity is the transitory, the fugitive, the contingent, half of art, the other half of which is eternal and the immutable”. Merging the transitory with the eternal, what is contingent, ephemeral, intimate, unique, and personal, with what is eternal, public, and universal, is the impossible challenge, squaring the circle proposed by the works that make up the second part of the exhibition A revolution has to be done little by little. The starting point, here, is always a situation, an event, or an accessory or personal datum, most of the time apparently insignificant, but which, when incorporated into the work, becomes “eternal and immutable”.

Francesco Arena, for example, uses a tombstone to immortalize the names of all Brazilian members of the Italian Masonic lodge P2 [Propaganda Dois], which in the 1960s and 1970s secretly and illegally but extremely effectively controlled Italian political life. . The supposedly celebratory value of the tombstone is, however, only illusory, the work becomes a gesture of derision: the letters of each of the names are there but scrambled, and the names are hidden, forgotten in a delirious text that does not speak. of them, and that therefore, instead of preserving, seems to strive to erase this memory. Nuno Sousa Vieira, in turn, presents new developments in the series of works made from the place of work, a warehouse where the factory for which the artist’s father worked for several years worked, and from where he takes the raw material. prime for your sculptures. The drawing made by Carla Chaim on the gallery wall, ephemeral and yet immortalized in the video, is a mirror that reflects the artist’s body: the diameter of the circle, and therefore the size of the work, could not be different, the apparently accessory data of the artist’s measurements is what makes her exactly like that and, ultimately, makes her eternal. And what leads her to dialogue, over time, with a series of works on paper made by Célia Euvaldo over twenty years ago, whose shapes were also defined by the extension of the artist’s arm, that is, by the gesture that her body allowed. Finally, it is also over time that the dialogue established by the work of Felix Gmelin takes place, whose paintings try to capture, on canvas, the essence of an enigmatic video made by his father many years before. Inherited and discovered by the artist after his father’s death, the video suggests a relationship with the history of painting, and also with fashion, but it deals, first of all, with the relationship between a son and his father, an invisible and submerged theme in other works. by the German artist, such as Farbtest, Die Rote Fahne II, which was part of the first part of this exhibition.