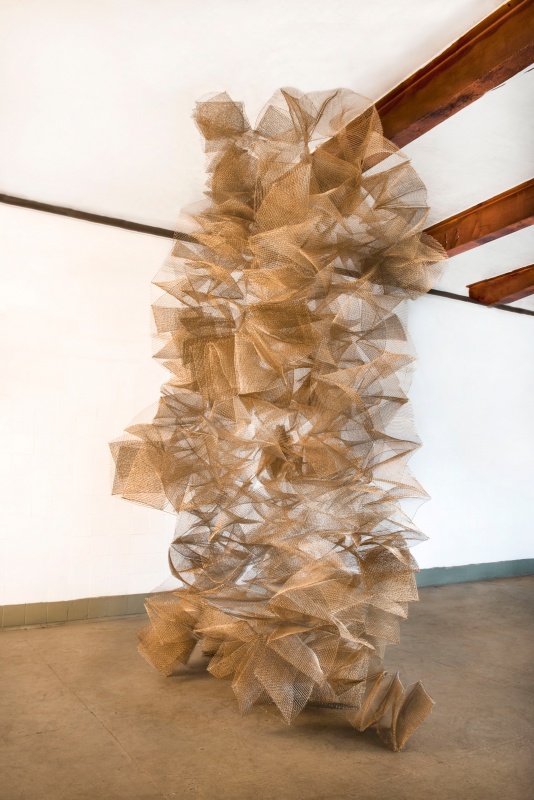 The borders between materials and those related to sculpture and their surroundings are some of the central interests in the new series of works by Frida Baranek. This equation between matter and space is inherent to sculpture in its historical perspective; from antiquity to the ephemerality of the installations made in the last fifty years, showing a three-dimensional art object has always been configured as a tensioning between scales, colors and materialities.

For anyone familiar with Baranek’s artistic path, the three-dimensional language is certainly one of her key interests and the basis on which her career has developed for more than three decades. In her work, the use of industrial materials is a constant, and they are always twisted and affected by the scale of the human body. Iron, metal and steel are used in the format of sheets and extended or tangled wires. The contrast between these industrial materials and others from a more organic sphere – such as wood and stones – has been notable since Baranek’s first works. Formally, it seems that the artist tends to use the emptiness of the artworks’ surroundings as a compositional element, while also following a line of research concerned with accumulation and excess. As aptly pointed out by Roberto Conduru, the artist’s poetics has to do with the popular term bololô[1] – that is, an amalgam of elements, a confusion of encounters that gives rise to a sometimes opaque materiality.

Liminaridade is the title of this exhibition and of her most recent series of works. This term refers to the experience of proximity to the subjective border between two different existential states. Considering a more physical understanding of the term, it is interesting to note that the central material used by the artist are protection screens. Commonly found in apartments and in civil construction, the screens are normally used to divide spaces and prevent the circulation of people and animals. In the artist’s hands, the material is folded in various parts, giving rise to works that provide the public with different experiences. Two of these artworks are specialized, occupying the gallery in different ways. One of them is in the form of a sort of column that connects the ceiling to the floor. The other is attached to the ceiling, suspended like a cloud. They both beckon for the public to circulate around them and to perceive how transparency is a key element for the artist’s research.

Some of the other artworks presented here for the first time are installed directly on the wall and remind us that opacity is also a constant characteristic of her research. These artworks are intriguing due to their contrast with other materials that have been part of Baranek’s repertoire – wood, iron and colored acrylics are added and transform her sculptures into essays on form. The folds made by the artist not only structure these works, but also create the rhythm that we perceive in their movement. The repetition and singularity of each of these folds echoes the gestural acceleration that was necessary for their conception.

It is worth noting that it was an event related to acceleration and weight they gave rise to these new artworks: last year, the artist had the opportunity to take a flight in zero gravity. The force of gravity, the acceleration of her body toward the ceiling, and the possibility of folding the air itself are elements that certainly led to this new series and which have occurred in various ways over the course of her artistic path.

I like to think of these works as also being an invitation to take a fresh look at the dividing and protective character of the original use of these screens. In light of recent historical events, it seems that it is impossible to look at the surfaces of these expressive sculptures and not see a discursive dimension in them. Far from dividing, these sculptures add and multiply – both as forms in space as well as an invitation for the gaze of other people to run over their textures and to think about the many limits they seek to impose on us, but we should fold and remount each of them in their own way.